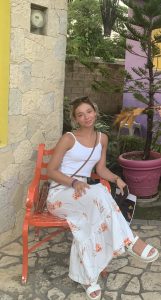 is a Rise Social Media Fellow and a senior at the University of Wisconsin- Madison graduating in the Spring of 2021 with degrees in Gender & Women’s Studies and Legal Studies, along with certificates in Global Health and Criminal Justice. Haylee grew up in Racine, WI where she spent most of my time at the beach and in the sun (when it was out). It was not until attending the University of Wisconsin-Madison that Haylee became passionate about organizing. Aside from Rise, Haylee is the president and co-founder of a campus organization called Period., which aims to normalize menstruation, raise awareness about what period poverty is, and what being a menstruator may look like. Through fundraising and donation efforts Period. attempts to alleviate some of the hardships surrounding this epidemic throughout the Madison area.