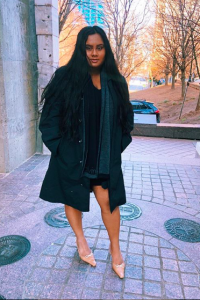 is a Georgia Deputy State Director at Rise. Aaminah is a third year GSU student majoring in biology. Growing up, gun violence was an everyday thing for Aaminah. Somebody’s somebody had lost their life to gun violence every week. Aaminah and her community had accepted that maybe this was just the way of life. The tragedy at Stoneman Douglas, which activated so many young activists, catapulted Aaminah into organizing within the Gun Violence Prevention space. It always has been personal to her. Starting with organizing for her local chapter of March for Our Lives Augusta, she worked alongside many of her friends and founded the Young Advocates of the CSRA. They realized that gun violence is not a stand-alone issue but stems from systemic racism, oppression and ideologies built within the roots of this country. To be able to help our communities, Aaminah and her friends knew they must tackle the issue from its root. She organized for the removal of SRO’s and small initiatives to help her city. In 2018, she graduated and moved to Atlanta, where she started the MFOL GSU chapter and soon after became the state director for MFOL GA. During this time, she has launched a comprehensive legislative agenda for a safer GA, modeled after the Peace Plan for a Safer America that MFOL introduced nationally. Aaminah worked closely with legislators, lobbyists and activists to advocate for HB 426, the hate crime bill after the tragedy of Ahmaud Arbery. Within the 2020 general election, among other things, she advocated on the ground for fair and safe elections as Georgia has a rampant history of voter suppression.

Organizing in her community and within the March for Our Lives space has given Aaminah the chance to work with organization such as Dream Defenders, GA poll workers, SDA, Everytown, Community Justice Action Fund and more. Aaminah believes her drive for a fair and just world, while healing our respective communities, makes her a unique candidate for this position. We must start change from the ground up.

When will people realize this is not a good argume

We must change this.

College students trying to convince everyone to su

🔥Every day we get more details about youth vote

Tonight, @POTUS is rolling out the American Famili

This is dope, but you shouldn’t need a blessing

@marypathector is shining a light on the work we a

Swipe to learn the history of women’s advocacy i

When we fight voter suppression, we fight for the

Enter to win $5,000 to pay for college if you've been recently vaccinated